I spend a lot of time on teleconferences and giving presentations via the Internet. I have tried a number of headphones and microphone setups. Most of them are good, but the last four months I have used a Logitech wireless earphone system (Logitech Wireless Headset H760 With Behind-the-head Design (981-000265)

). These headphones have quickly become my favorite. They are comfortable to wear, and the battery lasts three-four hours (you can use the headset while it is charging, with a standard USB cable). The sound is decent and the microphone is good enough to use for online presentations and for automatic dictation. I am actually using them now, for this blog post, using DragonDictate 11.

One of the reasons I like them is, of course, that I can wander around the kitchen or my office while dictating or presenting online. Another is the very intuitive user interface: If you want to mute the microphone, all you have to do is turn the microphone boom to an upright position. This is a very natural movement, and you are never in doubt about whether your microphone is muted or not.

I actually have two of these headphones. The first one I got four months ago. Unfortunately, since I have a large hat size (and they are a little bit on the delicate side) the headset broke – it cracked along the slide that goes behind the ears. I needed to use the headphones right away, so I take them and started using them, and then forgot about them. Eventually the crack widened and I had to call Logitech customer service, who promptly sent me a new pair which I am using now. The customer service call was quick and painless, and the Amazon employee I first communicated with assured me that my problem would be fixed promptly. Which it was, making Logitech customer service another reason to recommend this product.

(or, why BBC should put their material on Youtube).

The future of TV is on the net. Too bad the leading TV producers don’t understand it.

This year I am living in the US, without a TV. So far I have not missed it – we have Netflix for movies and Youtube for music and clips. Having to chose your programming yourself means zero hours channelsurfing on the sofa, and a delightful lack of background noise from breakfast TV shows and similar junk.

But – what to watch when you want a little fun? For my youngest daughter (she is here in Boston to take a year of US high school) and I Friday nights have been spent in front of our nice 23 inch monitor, wathing Never Mind the Buzzcocks, a great, wild, satirical quiz show about pop music. And when I want to relax by myself, there is the unsurpassable QI, a [deeply intelligent/self-indulgingly moronic] quiz show with a pop science bent. Or I can watch some of BBCs great series, such as Stephen Fry’s programs about the English language.

Through Youtube, I have come to know and appreciate comedians and actors such as Bill Bailey, Phill Jupitus, Jo Brand, Noel Fielding, Alan Davies, Jimmy Carr, Sean Lock, Rich Hall, John Sessions, Rob Brydon, David Mitchell and Dara Ó Briain, just to name a few. I have learned a lot and laughed even more. The episode where Emma Thompson describes how she used her body to terrify Stephen Fry to complete breakdown or where Jack Dee serves the mother of all putdowns to Sandy Toksvig and Ronni Ancona are complete jewels.

Which brings me to a sad point: The channel NickFromFulham, who (assuming there is a Nick and he is from Fulham) has put up all these videos, was recently shut down from Youtube. Where should we go now for our witty and intelligent entertainment? You see, almost none of the stuff that BBC produces is viewable outside the UK, except in short snippets, on DVDs, or on the anemic BBC America channel, for which we would have to get a TV, and then put up with programs that are both delayed and also watered down in terms of swearwords, sexual and scatological references and much of the Britishness that makes Britain both British and bearable.

The funny thing is, of course, that if it wasn’t for Youtube’s technical capability and NickfromFulham’s diligent uploading and characterization, I wouldn’t know much about QI and nothing about Buzzcocks. Which makes me wonder a) what else is out there, not just in BBCland but in many TV stations around the world, and b) why the heck doesn’t BBC (and NRK, its Norwegian state-funded equivalent and all others) put their stuff out in digital format?

To the first point: I gave a talk to NRK in June, about disruption in the media industries and so on. As part of the discussion of how to strategize for the future, I urged them to fill up available spots in their many channels with stuff like QI – quality shows that have a very local appeal, but in an increasingly global world will have global appeal without sacrificing quality. When you treat your viewers as intelligent, they will act intelligently. To quote David Foster Wallace, in his his brilliant essay E Unibus Pluram:

The point being – with infinite channel capacity, you can attract a large audience, in many countries, by not pandering to the lowest common denominator. (The fact that QI is one of BBC’s most watched programs shows that the common denominator may, in fact, not be so low after all.)

The future of TV is on the net – but in order to attract people to the net, you have to release your best stuff, and gradually become the source and context of quality entertainment rather than a prison of old business models. And incidentally, slamming the door in the face of your biggest fans is not the way to go about it.

As for us? Well, my daughter is 17 and an accomplished net surfer. She can easily find and download the next episode of Buzzcocks from one of many pirate sites. Not that I like it, but what can I do? (Well, IP spoofing and going to BBC’s web site in the UK itself would be another option.) Or I can watch something else, which, of course, lowers the commercial value of all those actors and comedians participating in the things I would like to see.

Incidentally, here is one of the most watched Norwegian skits on Youtube. Let’s see if you understand it, even if it is in Norwegian (with subtitles):

Tim Minchin, UK-based Australian comedian, composer and contrarian, performs what is my favorite Christmas tune, his “White wine in the sun”, which manages to be sentimental, smart, atheistic (or at least skeptical) and deeply felt, which I think everyone should be. Especially at Christmas, which is about so much more than religion.

And I am not just saying that because I am 3501 miles from home, with the family arriving for a prolonged Christmas visit, or because, just like me, Tim met his wife when he was seventeen and they stay together, but because this song describes the best parts of Christmas – indeed, the whole purpose of Christmas – quite precisely.

Looking forward to Christmas far to often is attributed to consumerism (at least for small children) or has to be legitimized through some religious reference, such as the inevitable pre-Christmas op-eds about how we are losing sight of what the holidays are all about, etc. etc.

So, this year as any other, I am looking forward to Christmas with our little rituals.

Just as long as it isn’t white. All our snow gear is in Norway. Snow would really let us have an American experience…

Found this quote in Jeff Jarvis’ Public Parts, from Douglas Adams’ How to Stop Worrying and Learn to Love the Internet, published in Sunday Times in 1999:

I suppose earlier generations had to sit through all this huffing and puffing with the invention of television, the phone, cinema, radio, the car, the bicycle, printing, the wheel and so on, but you would think we would learn the way these things work, which is this:

1) everything that’s already in the world when you’re born is just normal;

2) anything that gets invented between then and before you turn thirty is incredibly exciting and creative and with any luck you can make a career out of it;

3) anything that gets invented after you’re thirty is against the natural order of things and the beginning of the end of civilisation as we know it until it’s been around for about ten years when it gradually turns out to be alright really.

This is a surprisingly good explanation of a lot of things, and certainly something that should be taken into account by anyone trying to design policy to deal with technology.

What a pity that Douglas Adams died so young. We could need a lot more of his razorblade analysis and learned humor. 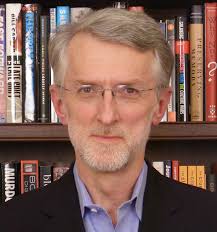 (David Weinberger has a much better writeup.)

Jeff Jarvis rake thin, grey-haired, dressed in black and bearded, and has had cancer, but any similarity with Steve Jobs stops there. His latest book, Public Parts, advocates more openness in a time concerned with privacy yet somehow unable to press that “like” button on Facebook.

His key point is that the tools of publicness need to be protected – and though privacy and publicness is not in opposition – and his fear that privacy concerns are misapplied and sometimes dangerous.

When Kodak was invented, there were articles written about “fiendish Kodakers” lying in wait, and the cameras were banned in some public parks. Anxiety about privacy goes back to the Gutenberg press, microphones, video cameras. Society is looking for norms, but legislates to keep the past, in terms of the past.

The tools of making publics: Habermas said public discourse started in coffee houses in the 18th century as a counterweight to government power. It was ruined by mass media. Now we have the tools of publicness, and we get things like Occupy Wall Street. Jeff started (after a few glasses of Pinot Noir) the #fuckyouwashington tag, which spawned a platform with more than 110,000 tweets.

Had to understand what privacy is – first take was that it had something to do with control. Came to think that privacy is an ethic. This means that publicness is also an ethic, an ethic of sharing information. Sharing his prostate cancer, including impotence, on the web. Hard to do, but got tremendous value out of it.  Various people contributed to the blog, telling things that the doctors won’t say, etc.

We need to learn from young people how to control sharing. Danah Boyd: COPA requires companies not to keep information about children younger than 13. But more than 50% of 12-year olds had Facebook – “on the internet everyone’s 14.” Sullivan principles (developed for apartheid) may help: Rules for companies to operate in South Africa.

Fear that governments and companies will take this away.

Various questions in the question round – but the discussion didn’t really take off.

Jeff comes off somewhat like his books: Well articulated and with many interesting and well described examples, but I keep looking for some more analysis and less description. More depth, simply, not just a plea that openness is good and we need to develop norms on how to handle it. But the “history of the private and the public” part of his book is very good. And it does make for an interesting read.