(Notes from an Executive Short Program called Digitalization for Growth and Innovation, hosted by Ragnvald Sannes and yours truly, in Sophia Antipolis right now.Disclaimer: These are my notes, I am writing fast and might get something wrong, so nothing official by Accenture or anyone else.)

Cyrille Bataller is a managing director and the domain lead for Intelligent Computing, with the Emerging Technology group at Accenture. He leads Accenture’s exploration of the Cognitive Computing field

Skilled work increasingly done by machines – doctors, lawyers, traders, professors etc. Large potential impact, also societal, but exciting new technology. Cognitive computing is IT systems that can sense, comprehend and act – and are perhaps the most disruptive technology on the horizon. They can interact with their environment, learn by training instead of coding, and can analyse and use enormous amounts of data. The quest for cognitive computing has a long history – and has had a varied history, with periods of advances and periods of setbacks, or at least less interest. We differentiate between “strong” AI – achieving consciousness – and “weak AI” – having the machine mimic certain capabilities of humans.

Some detail – image analysis is about deep learning, using neural networks to mimic how the brain works. Use layers of increasingly complex rules to categorize complex shapes such as faces or animals. In one case, they used neural networks to recognize and classify images of cars as undamaged, some damage or totalled to an accuracy of 90%. By applying text analysis as well, this could be used by an insurance company to analyze insurance claims. Google has acquired a company called DeepMind to look at images on the web, eventually recognizing cats.

Another example is use of robotics in business operations – from minibots, companies such as XL and AutoHotKey to automate application software, to standard robots to using virtual assistants to do user support, for instance. You can have a team of robots in the cloud to work alongside your real back office. These robots can observe and learn and gradually take over or optimize these activities, such as updating documents (powerpoints, for instance). Could be used to observe how an accountant works, for instance, and issue certification based on following proper procedures. You could have 20-30 people in the back office and 100s of robots learning from them and doing the regular stuff.

Virtual agents: Amelia, handling a missing invoice situation. Amelia can understand, learn and solve problems. Generates a flowchart which can then be optimized and analyzed.

Video analytics is another application that is receiving lots of attention. One problem with CCTV videos is that they are almost only used forensically – checking a certain date and time – because nobody has time to watch the videos themselves. Can be used to count cars and recognize events, measure queuing times at customs and immigration, measure service times, monitor for lost objects on a train, analyze the age distribution on public transport, detect emotions, understand the hot and cold zones in the shopping center, find leaks in an industrial setting, etc.

The following framework (from the perspective document referenced below) shows a four-quadrant framework that can help guide companies in choosing the approach towards cognitive computing: 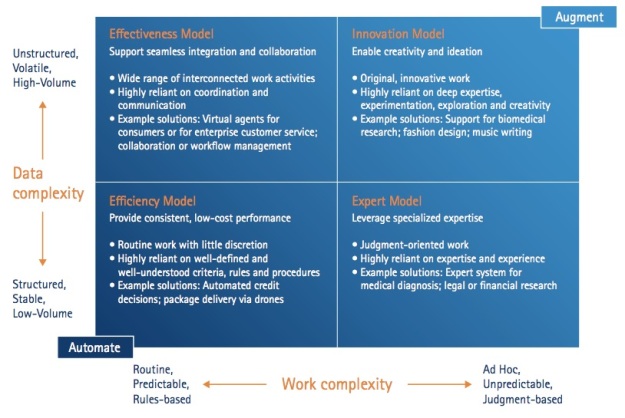 See Accenture.com/cognitive for more information and a point of view document, written by Cyrille Bataller and Jeanne Harris.

1 thought on “Accenture on Cognitive Computing”