The week before last was spent on Hawai’i (Oahu, to be precise), courtesy of an old collection of American Airlines points, that fact that we are in the US and hence already have paid for half the flight, and a week’s break in daughter number three’s high school schedule.

The goal for the trip was simple: New Facebook profile pictures for father and daughter – standing up on a surfboard. To this end, we had signed up for two days of surf classes with Hawaiian Fire, an eminent surf school run by firefighters. Their classes take place on the southeast side of Oahu, at a beach where waves are consistent and the water reasonably shallow – as a novice, you can always jump off the board and stand on the bottom. (In practice, you want to be a little careful, always landing flat in the water, since there are rocks and corals on the bottom.)

To make a short story short, we both made it into vertical – daughter number three rather faster and better than her top-heavy father. 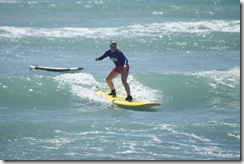 And lastly, let it be said that despite, in certain aspects, feeling a bit like Las Vegas (at least the brand-name shopping areas of Waikiki), Hawai’i has a distinct culture, a refreshingly laid-back attitude, fantastic nature (we particularly enjoyed exploring the North Shore and the Tantalus/Round Top drive) and an extremely enjoyable climate. It is only to wonder that not many more people live there…